At the Terminal, Summer and Autumn Produce Compete 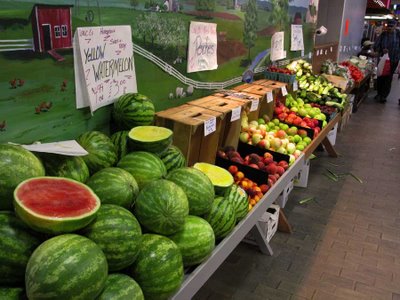 Missed Headhouse and the Fairmount and South Street markets the last couple of weeks (I'm planning to hit Fairmount this afternoon), so this report focuses on the Reading Terminal Market, where plenty of goodies reflected both summer and autumn.

L. Halteman, though primarily a butcher shop and deli, offers in-season produce at the Reading Terminal Market. Love the primitive Lancaster County scene that serves as a backdrop (see photo at left) to their fruits and vegetables, which are usually of high quality and competitively priced.

Expect to see paw paws this weekend at Livengood's and the Fair Food Farmstand. I'll be checking out the former this afternoon at their Fairmount & 22nd venue. For those who've got a yen to travel, or just want to learn more about this native North American fruit, visit the Ohio Paw Paw Festival this weekend, just about 8 or 10 miles down the road from Ohio University, Athens. Livengood had a few of the paw paws gathered by Sam Consylman last week, but there weren't many and they weren't ripe. If a paw paw is all green and lacks significant mottling, it's not ready. The browner and softer the better. They were priced at $2.95/pound.

It's the peak of local pear season, especially Bartletts. Benuel Kauffman's Lancaster County Produce at the RTM was selling them for $1.49/pound. Apples, of course, are now starting in a big way. All the early commercial varieties could be found this past week at the RTM and city farm markets. Iovine's also had navel oranges from South Africa (it's the end of their season) at three for a buck.

I'm still concentrating on peaches, however. Iovine's featured Jersey whites and yellows at $1.19 recently and nectarines at $1.49. O.K. Lee had Jersey yellows recently for 99-cents. Ben Kauffman's yellow peaches and nectarines were $1.99, white peaches $2.69. Plums are still plentiful, though the season is shifting to the late varities like the Italian prune plums, $2/pint at Kauffman's.

Still plenty of local corn available, though the quality sometimes flags a bit late in the season. Livengood's was selling theirs for 70-cents an ear, Kauffman's for 50-cents, Iovine Brothers three for a buck. And ya gotta have tomatoes. Kauffman's was selling Brandywines for $2.99. Iovine featured Jersey plum (Roma) tomatoes at 99-cents; over at Fair Food Farmstand they were going for $2.

It's fig season, and Fair Food was selling some from a South Philly tree at six for $3. (I can pick them for free up the next block in my Fairmount neighborhood). Iovine's got California black figs at less than half that price: $2.99 for a pint box of about 10-12.

The price of lemons fell at Iovine's to a dime apiece, but limes are still a quarter. They are selling local green peppers for 99-cents, $1.99 for sweet red bells. Both come from Shadybrook, the Iovine's contract supplier in Bucks County.

On the protein front, chicken feet must be getting more popular, since the price seems high at $2.19/pound at Godshall's, where hearts go for $2.09 and livers and gizzards $1.89. What happened to lamb shanks, which used to be a cheap meat, looks like it's happening to chicken feet. For comparison, Eberly's whole organic chicks were selling for $3.89 at Giunta's Prime Shop. Over at Martin's Quality Meats & Sausages, one of my favorite "trash" cuts, lamb breast (riblets) could be obtained for $3.29. I forget the price, but Martin's brother Charles Giunta had veal breast at a bargain price, too.

I don't know if they'll have them this week, since fish supplies are so variable, but John Yi's recently had the largest porgies I've ever seen, $2.99 for Florida behemoths. Headed mackeral was for for sale at $1.99, whole black bass for $5.99.

One wag called it the Bermuda Triangle of the market: the meridian between Tootsie's Salad Express and Olympic Gyro: vendors locate there but mysteriously disappear. The latest victim was the Everyday Gourmet, in the space formerly occupied by Andros. Their concept for prepared food never caught on. Further along the meridian, Dutch Country Meats gave up the ghost earlier this year, and Natural Connection left the space formerly occupied by Margerum's. The last spot will be filled by Jonathan's Best, brought to you by the same folks who operate a similar gourmet market in Chestnut Hill. In addition to groceries they'll feature homemade soups and pre-made sandwiches.

The availability of a full "block" where Dutch Country Meats and Everyday Gourmet were located presents a challenge, but also an opportunity, as far as RTM GM Paul Steinke is concerned. Among the features of the space is a fully-installed range exhaust, a rare commodity in the market, and a walk-in refrigerator. Right now Benuel Kauffman is using part of the Dutch Country Meats space on a temporary basis.