Every year at this time, I buy a couple pawpaws from a Earl Livengood at the Reading Terminal Market. And each year, eating them fresh, I commit myself to making something else out of them. Today, I finally did: ice cream.

I used a cooked base, adding about a cup and a half of strained pawpaws (about five pawpaws) and a scant teaspoon of vanilla, to half a quart each of whole milk and half-and-half (not ultra-pasteurized), in addition to the sugar (just shy of a full cup) and two eggs. (I didn't go for a true French base, that would have been much too rich for the fruit, but I did want a little more richness than a Philadelphia-style recipe usually produces.)

Wow! It's aging in the fridge's freezer now, but it was superb right out of the ice cream freezer. The pawpaw flavor came right through: banana-like, but with a subtle acid accent, just a little spicy. Many recipes call for adding a little lemon juice and/or substantial quantities of orange juice; totally unnecessary.

The key, as in all fruit ice creams, is to make sure the fruit is absolutely perfectly ripe. In the case of pawpaws, that means they will have considerable brown patches on the thin green skin. You'll know they're ready when you walk into the kitchen from the out of doors and are delighted by the tropical fruity scent -- all the more incredible given that pawpaws (the largest native American fruit) grow in the Midwest and Mid-Atlantic states as well as the South. Each fruit has about a dozen or more rather large black seeds, but it's easy to separate the flesh from the seeds with an implement (I used the back of a wooden spoon) to mash the pulp through the strainer.

PS: Don't confuse these pawpaws, Asimina triloba, with the tropical fruit sometimes called pawpaw, which is another name for the papaya.


New t-shirts at the Down Home Diner for sale. One bright red shirt is emblazoned with: "I [heart] Bacon", another with "Eat More Scrapple".

To accompany some pork, apple cider is ideal. Benuel Kaufman has the unpasteurized, unfiltered variety. I bought a quart today for $2.25. If you've never had it (and don't have a serious immune system disorder), get yourself some. It's a rare seasonal treat.

O.K. Lee had a good deal on limes, a bag of about eight for 99 cents, and bags of about half a dozen lemons at the same price. (Iovine's was selling the limes at 5 for a buck, lemons 3 for a buck.) Other good deals at O.K. Lee included mixed colored peppers (red, green,yellow) at 99 cents for a two-pound bag, 79 cents for all greens. Lancaster County Bartlett pears, 99 cents for a 1-1/2 pound bag. Red cabbage, 39 cents.

Pepper survey at Iovine Brothers: Reds and Greens 99 cents, Oranges and Yellows $3.99. About six varieties of eggplants, with prices at 79 cents for the local purples and going up from there. Hass avocadoes back down to a dollar apiece. The chantarelles looked particularly good this morning, but as pricey as ever at $34.99. Small black radishes, $2.49/pound.

More cases delivered and partially installed at the new Giunta's butcher shop; they still have a long way to go if they intend to open this month.


A sure sign of fall: apple cider. Benuel Kaufman says he'll have it starting this Thursday at his Reading Terminal Market stall.

I ate that big apple Sam Consylman sold me last Thursday. Definitely a Delicious on steroids, though with more flavor and slightly less sugar that those mealy Washington State examples. If I was going to give an apple to a teacher, this would be the one.

Next Monday at the market will be the "Local Food Expo," sponsored by the Fair Food Project. A similar event was held last spring for the restaurant and food supply industry, but this fall's event will be open to the public on Sept. 25 to 4 to 6 p.m., giving us mere consumers a chance to meet more than 20 family farmers and food producers from the region, showing and offering samples of the goods they offer.

On this week's RTM agenda (Thursday, Sept. 21), the monthly "Producers Corner" program. "Indian Summer" is the theme with samples to taste of tomato and corn salad, peach cobblers, plum tarts and sangria.

Some of the new cases are ready to be installed at Charlie Giunta's new natural meat store. There's a lot of work to be accomplish quickly if he's to make his goal of opening before the end of the month.

No way will Hershel's deli be open before the Jewish high holydays; although design work is complete the vendor still needs permits from the city's Health and L&I departments. Until that happens, Spataro's stays put. LeBus, however, figures on beginning construction of its new stand this month.

Blackberries were briefly availble at Benuel Kaufman's this past Saturday morning ($2.95 per half pint), but by the time I left the market at 11:15 they were gone. That's probably it for the season. Lots of Barlett pears at $1.49/pound. White peaches and green and colored bell peppers sold for $1.99, prune plums for $2/pint.

Over at Iovine Brothers, local green peppers featured at 50 cents/pound, but all the colored varieties (none local) priced at $3.99. Local Gala apples also two pounds for a buck, local eggplant 79-cents a pound. Another sign of autumn, pomegranites $1.99 apiece. Hass avocados $1.99 (vs. $1.49 at O.K. Lee). Black figs $2.99/pint, red and green seedless grapes 99-cents, red globe, black seedless and muscatine grapes $1.99. Looking at my receipt I noticed that it offerd a 10 percent discount at the Down Home Diner; Jimmy Iovine said he's had that offer for months.

The Fairmount market was brimming with lots of good things today, as well as a new (to me) vendor, Cressley's Greenhouses and Produce Farm. I'll let these photos speak to some of the variety: 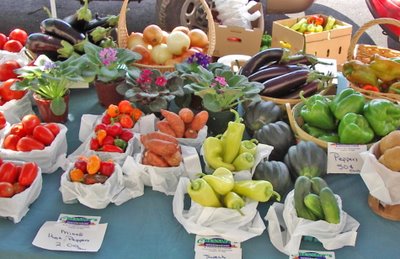 Sam Consylman and his apples

In addition to Brandywine and German stripped tomatoes, I picked up corn, peaches, canteloupes and, a special treat, apples from Sam Conslyman's tree. The smaller of the apples held by Sam is most likely a winesap relative. I ate a small one immediately after bring it home, and it was crisp and flavorful, sweet enough but not overpowering. The other apple appears to be a relative of Delicious, either a forebear or a cousin; it's huge, but I haven't tasted it yet.

Sam took a walk by his local waterway near Lancaster this morning to check on the Paw Paw trees. He spotted the first fruit to drop, though it still wasn't quite ready. (Paw Paws are harvested after they drop; the art is to gather them before any critters do.) He expects they'll be peaking in 2 to 3 weeks.