Down Home Diner has added a full roster of soups now that the cooler weather has arrived. Six soups were on the menu this Saturday: seafood gumbo, tomato bisque, chicken noodle, potato leek, black eye pea, and beef-barley. The signboard says they are all homemade.

Also a sure sign that summer (and gin and tonic season) is over: the price of limes and lemons both 10 for a buck at Iovine Brothers. And yellow and orange bell peppers also a bargain at 99-cents a pound, same price as green peppers; reds were $2.99. Seedless cucumbers also a relative bargain, two for a buck. California seedless grapes a good deal: two-pound clamshell for $1.49.

Not too much sign of visible construction at Hershel's East Side Deli yet. Spataro's seems to be settled in nicely at their new location. Flying Monkey added an attractive awning a couple of weeks ago, brightening the look of center court.

I wanted to try a ham steak from Giunta's Prime Shop, but so far they only have the spiral cut hams. So, instead I picked up a ham steak at Harry Ochs for the first time. An excellent slice of ham, better than any other I've purchased at the RTM since Moyers left, and, indeed, it at least matched Moyers in flavor and texture. Price was $6.99/pound, iirc, but well worth the premium.

Giunta's does have a nice selection of fowl, including Eberly's chicken. The ducks are on my radar for purchase later this fall.

What was missing from the produce vendors, imho, are baking apples. Sure, there are varieties available that can be baked in pies, cobblers or by themselves with success (the Jonathons, Winesaps and Romes come to mind), but it would be nice to see some traditional tart baking apples available, like Rhode Island Greenings, Northern Spy, or one of the sweeter Pippins. 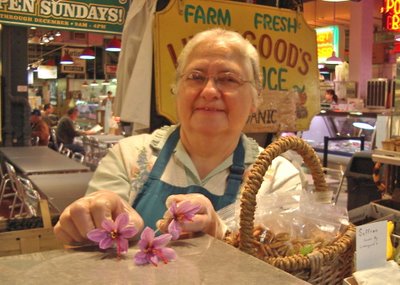 Lots of good stuff at Livengood's today, including saffron. Mrs. Livengood (above) even brought in saffron flowers (a variety of crocus). She suggested adding a thread or two to a pot of potatoes just a minute or so before they are done boiling to give them a lovely color and hint of saffron flavor. Livengood's still had a few raspberries; Earl said he was surprised the frost didn't get them, but it was a light frost. They are delicious. In addition to the berries, I picked up some exceedingly fresh celery and what I assume is about the last of the season's tomatoes. Lots of good fall veggies at Livengood's, along with green and concord grapes.

Stopped to look over Giunta's Natural & Prime Meats, which just opened this week. Impressive looking meats, reasonably priced. The chickens are Bell & Evans, an excellent quality bird (the same brand sold at Whole Foods under their own name). The beef and pork comes from a producer in Oskaloosa, Iowa, Vande Rose Farms. The producer also does hams; this week Giunta's only had spiral cuts, but I'll be on the lookout for steaks. Vande Rose's materials say they raise Duroc hots, "a 175-year-old pure breed known for its juicy and flavorful meat", and hereford beef.

Construction has started on Hershel's deli in the former Spataro's space. No sign of a start yet on the new stall for Le Bus.

At least a couple more vendors will be joining the Sunday opening program, including Tommy DiNic's. So, while you may not be able to buy a beer while watching the Eagles game at center court, at least you can get your sammie. Last week the only sandwich places open were Salumeria and Bassett's Turkey. The latter had very large lines last Sunday. Vinnie Iovine said that while last Sunday was slower than any other day of the week, it was still well worth opening. This week will be a fairer test: no big convention, no event like the Harvest Festival, and competition from the Eagles. Here's how Bassett's Turkey looked last Sunday:


Nearly Saturday-sized crowds at the Reading Terminal Market's first "test" Sunday for 2006. Fair selection of food purveyors open, as well as sellers of other wares and food-for-on-premises-consumption. RTM Manager Paul Steinke said five merchants opened who did not earlier indicate they would be, including the Thai food stand. Jim Iovine hopes that, based on how busy the market was today, some merchants who stayed closed but were "on the edge" of opening will be next Sunday.

Longest line around noontime was at Bassett's Turkey. Other only places open selling sandwiches were Salumeria and the Down Home Diner.

Now, if only the Beer Garden could be open and put in a projection TV for Eagles games!

Good turnout today might have been influenced by the Harvest Festival, which included food stands out on Harry Ochs Way (Filbert Street) and free tractor-pulled hayrides around the block. There is a fair-sized meeting starting tomorrow at the Convention Center which might have made the Sunday undertaking more profitable: the National Funeral Directors Association, which hasn't met in Philadelphia since 1950.

The fee per car Parkway charges the RTM Merchants Association for customer parking in the garage goes up by 25 cents January 1 (to $5.50 from $5.25). Customers who spend $10 at the RTM are charged $2 for two hours, so the merchants provide a significant subsidy for shoppers. The association has to figure out whether to hold steady on what the customers pay or increase it; and because Parkway's machines aren't good in providing coin change, the merchants may consider raising the amount customers pay by an even dollar, which would also lessen their subsidy.

As expected, Spataro's made the move to its new location this week, directly opposite Tommy DiNic's. Under their new lease Spataro's has added cheesesteaks to the menu, so Rick's Steaks now has a direct competitor.

Speaking of new leases, they incorporate a new clause, which Steinke says will be enforced, requiring merchants to be open for business and prepared to serve customers until the official 6 p.m. closing time. All too many merchants start shutting down and cleaning up at 4-4:30 p.m. It's probably asking too much for them to stay open until 7 p.m. so those who have to stay in the office late can stop by and pick up something to eat at home, but that's definitely on my wish list.

This past Thursday I picked up those fall raspberries at the Fairmount Market from Earl Livengood. They were spectacular (I served them alongside the chocolate buttercream topped chocolate cupcakes from Flying Monkey). The fall crop had lots of more flavor than the summer berries. If he has them Tuesday at South Street, don't hesitate.


I know it's October, but would you believe Earl Livengood featured raspberries this past Saturday?

The price of limes (but not lemons) dropped considerably. Over at O.K. Lee's, a bag of 7 to 10 went for $1 on Saturday; Iovine Brothers was selling them loose at six for a buck. Also at Iovine: Hass avocados $1 each, fresh peanuts in the shell back at $2.49. Bell pepper survey: greens and reds 99-cents/pound, oranges and yellows $3.99.

Mix-and-match: nine varieties of apples at L. Halteman's, all priced at 99-cents a pound. Kaufman's featured slightly pricier Macouns and Winesaps; I found the Macouns lacked their usual snap. Plenty of unpasteurized cider available when I stopped by about 9:30 a.m. Saturday.

On the fish front, headless sardines at Golden $3.99, the same price as headless smelts. Over at John Yi's a fish I haven't seen in a while, bonita; it was prided at $2.50 each for whole fish. Spanish mackeral filets $3.99. King salmon $13.99. Soft shell crabs still around at $4 apiece (slightly pricer per at Golden, but available at that price if you buy five).

Spataro's was scheduled to make the move to its new location today, opposite Tommy DiNic's. (On Saturday they were hanging the new menu signboard.) That clears the way for Hershel's Deli to begin construction at the old Spataro's stand, with the goal of a November opening.

In other moves, Giunta's Meats aims to open this Saturday; no decision yet on whether it will be open on Sundays. LeBus is scheduled to start work this week on its new stall.

This Sunday marks the first Sunday opening of the "test" this year. As of Saturday about three dozen merchants had signed on. Hours will be 9 a.m. to 4 p.m.

This coming weekend also marks a two-day Harvest Festival, including the Guess the Weight of the Pumpkin contest.

There seems to have been an improvement in the parking rates at the Parkway garage across 12th street. With the RTM discount ($10 purchase), the rates for time beyond two hours have gone down. In the past, if you stayed past the two hours for two bucks max the rates kicked up into the stratosphere. Now their a bit more reasonable: $6.50 for up to 2-1/2 hours, $11 for up to three hours. If I recall correctly, in the past the rate shot up to the $20 range if you stayed beyond two hours.


The RTM's Sunday hours start Oct. 15. So far, nearly three dozen vendors have signed on for the Sunday openings this fall.

The initial Sunday is coincident with the RTM's annual Harvest Festival, which will be held that Saturday and Sunday. Hay rides around the block for the kids, extra goodies for the foodies on Filbert Street (Harry Ochs Way), which will be closed to vehicular traffic, other than hay trailers.