Pawpaws were available Thursday at Earl Livengood's when he appeared at the Fairmount & 22nd market. Earl's buddy Sam had a bunch of small, very ripe ones on display, but had some larger, not quite as ripe (but still ready) specimens in the truck available. I took three and let them sit on the counter overnight, then turned them into pawpaw chiffon pie, which was smooth, perfume-y and rich (pureed pawpaws and gelatin mixed in after custard had thickened, then whipped egg whites and cream folded in after the mix began to set). Since the three large pawpaws I purchased were a bit shy of a full cup, I pureed a banana to stretch it out. The resulting product still had a pronounced pawpaw aroma and taste which, after all, is banana-like.

Maybe Earl will have some Saturday at the RTM. If it does, grab them. Pawpaws make great ice cream, too.

The corn we picked up from Earl was still quite nice, especially considering the season is basically over. The Brandywine tomatoes were still tasty, too. He also has chestnuts available.

Today I introduced an English friend to the wonders of Tommy DiNic's roast pork (rabe and cheese); she was instantly won over, both by the sandwich and the variety of foods available at the RTM. She's got some great seafood in North Devon, along with lamb, but nowhere near the diversity of fresh food products as here. She observed, however, that the shrimps and other shellfish back home would cost in pounds sterling what we pay in dollars -- in other words, twice the price.

Since it's apple season I invested in some sharp Canadian cheddar ("rat cheese") and brie at Downtown Cheese. Either will go well with the Cox Orange Pippins I brought back from my New England trip.

A key focus of the RTM's marketing plan in coming months is to target new condo residents in Center City. They've identified 5,000 such households and will be sending them oversized promotional postcards now, before Thanksgiving and Christmas, and again in the spring, coupled with a giveaway. The idea is to make sure they are aware of the market, especially the Sunday hours.

Signs posted in the former Foster's space would lead one to believe the market has found a tenant ("Coming Soon..." but without any additional hint.) RTM General Manager Paul Steinke has been trying to lure another kitchen hard goods retailer and indicated a couple of weeks ago he was negotiating with one which would enable the market to retain the show kitchen space as a separate entity.

Benuel Kauffman has got unpasteurized apple cider again. As well as orange and white cauliflower, and those elongated red beets about which I always rave. 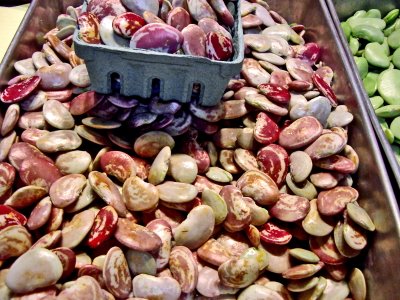 Fava beans come in number of varieties, including this purple-blotched bean which was being sold this morning next to its legume cousin, the lima, at Livengood Produce. Earl said he was given the seeds by a customer who told him he was a fava bean, but he wasn't sure what it was since it had the same shape and similar taste, eaten raw, to a lima. (I Googled fava images, and found some that looked like Earl's, so that's what it appears to be.) I never much cared for limas as a kid, since they always came out of a can, but the fresh version sauteed in butter or good olive oil, seasoned as you like, makes a nice change in vegetables.

Harry Ochs was featuring dry aged Delmonico steaks (rib eye) for $10.99/pound today. That's about what I paid last week for the same cut (wet aged) at Giunta's Prime Shop. Giunta's were excellent, and I would expect Ochs' to be their equal, at the very least.

Mammoth cauliflower heads competed for space with the corn at Kauffman's Lancaster County Produce. The Frankenstein-sized veggies were priced at $4.95 apiece. Benuel still doesn't have unpasteurized apple cider. (Benuel will be closed next Saturday because of a family wedding.)

Apple varieties are still fairly limited, but we should start to see a diversity of America's favorite pome fruit soon. Iovine Brothers Produce offered local apples from its contract grower, Shady Brook, for 99-cents; the variety was not noted, but they might have been Honey Crisps from the shape and color. (I'll be traveling to Maine and New England until the end of the month, but I've already contacted a Massachusetts orchard which says my favorite dessert apple, the Cox Orange Pippin, should be ready when I'm in the neighborhood. Few orchards grow this variety in the U.S., because it isn't a particularly prolific cultivar, but it's a favorite in the UK, which gets much of its COPs from South Africa.)

Smallish Hass avocados on sale at Iovine's today for 99-cents apiece, just in time for football season guacamole dips. Local Shady Brook corn at Iovine was 25-cents an ear, vs. four for a buck at OK Lee. Lee's had a better bargain in lemons, with bagged fruit (seven to a bag) selling for $1; both produce vendors were selling loose lemons at 3/$1.

Sam Consylman, who sells foraged finds as well as fruit and veggies from his garden at Livengood's, is still waiting for pawpaws to drop from trees along the riverbank, but if you have a hankering for this most American of fruits you could meander down to southeast Ohio next weekend for the ninth annual Ohio Pawpaw festival. It's at Lake Snowden, just a few miles outside of Athens. The pawpaw eating contest will be held just before dinnertime Saturday.

I've been cooking up peppers and onions (with some sliced garlic thrown in) like mad the last week or so. Just love the combination, especially with red meat (so far I've served them with those Delmonico steaks, burgers and bratwursts) though it works well with heartier fishes as well as on its own. Today I picked up some sweet red frying peppers from Benuel, but last week I used very flavorful Cubanelles from the Fair Food Farmstand.

When you visit Earl Livengood's this week -- either Thursday afternoon at the Fairmount market or Saturday at the RTM -- be on the lookout for some of Sam Consylman's gorgeous apples. Their exact provenance is unknown, thoughy they are clearly related to the Delicious variety. But otherwise they hardly resemble the mealy, sticky-icky Washington State product. The exterior of the apples are bumpy and occasionally scabby, but the flesh is, as Tracy said of Hepburn, "cherce". They were $2.50/pound at today's South Street Market.

Also, Sam will be checking the paw paw trees by the river this week to see how close the fruit is to dropping. They should show up over the next two weeks. Makes great ice cream. 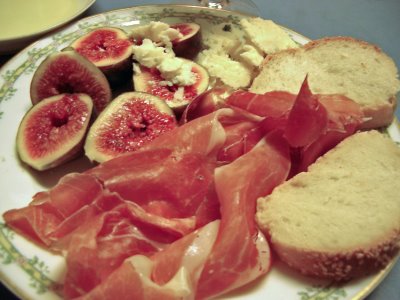 Those figs purchased last week at Fair Food made a great dinner (photo above) when served with some of Northland Dairy's Bergeré Bleu from Upstate New York, Faragallo's sesame seed bread, olive oil and Hermann Wiemer's dry riesling. I didn't spot any figs today at Fair Food, but they still had plenty of Mirai corn.

Benuel Kauffman had added help at his produce stand today: 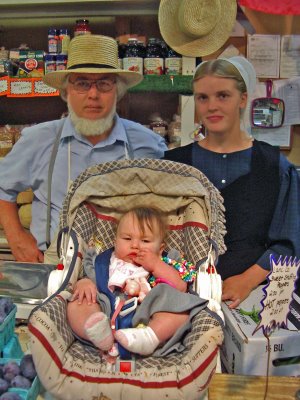 That's Emma Rose, Ben's eighth grandchild, six months old, posed here with mom Mary and the head of the clan. In chatting with Benuel today he says his craft items designed for the convention/tourist market and jarred and dry goods have been 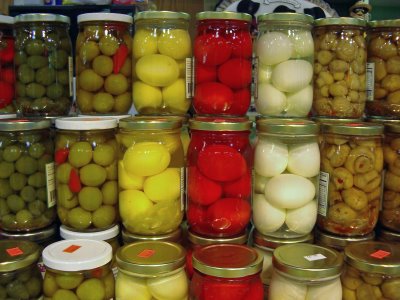 selling quite well ). He used to close during the winter when he started at the market 15 years ago, but about half a dozen years ago started experimenting with winter hours. The first couple of seasons went slowly, but business is solid now, he reports. As for the produce end of his stall, Benuel has pretty much given up growing his own fruits and vegetables for sale and instead relies on other Lancaster County growers. He tries not to buy from "farmers who grow everything" but instead source his produce from those who specialize on just a couple of products. For example, his supplier of white corn is just about done for the season in order to move on to his pumpkin and squash crops. So Benuel will be turning for his corn supply to his bi-color supplier. (Still no unpasteurized apple sider, but Benuel says it will arrive "anytime soon".)


Rieker's German-style cold cuts, sausages and other products will be added to the mix at Dutch Country Meats soon. Although the former owner of DCM added some German-style products after Siegfried's closed, the new owner eliminated those items. Shoppers asking him for the products convinced him they would be worthwhile adding. (L. Halteman's also offers some similar German style products.) Rieker's Prime Meats is located in the far, far Northeast, practically Fox Chase (where Oxford meets Rhawn). I've only been there once, but the selection is astounding and it's well worth the trip. But the convenience of getting at least some of their wursts at the RTM is most welcome.

Joe Nicolosi of DiNic's reports that among customers asking for greens on their sandwich, slightly more go for broccoli rabe than spinach. Until recently, only spinach was available at the roast pork sandwich mecca. (Pork mecca? Something's wrong with that.)

There's a sign hanging in the former Foster's saying it will be occupied soon. RTM GM Paul Steinke says he's close to a deal that will bring a kitchen hardgoods merchant to the space (no, not Kitchen Kapers). As for the demonstration kitchen in the rear, Steinke says that will remain completely separate from the store and will be operated independently. With space for about two dozen students, he hopes to resume cooking classes after the store is up and running, which should be by the end of October.

There's another large vacancy: Natural Connection/Juice Connection, which went out of business Friday. No tenant, but Steinke hopes to sign a retailer selling groceries (canned goods, dry food goods, etc.) and environmentally-friendly household cleaning products. Steinke said the latter is a small but growing segment nationwide. Traditional grocery sellers who concentrate on canned and box goods haven't done well at the market -- that's one of the reasons why Nell Margerum closed her store in the same space about a half dozen years ago. The thinking, yet to be proved, is that there will be enough demand for the "natural" household items that it would support the grocery end of the business. It would also give RTM shoppers one less reason to patronize Whole Foods.

One other significant vacancy remains at the market: the former LeBus stall near the 12th and Filbert. Nothing brewing for that space yet. It's also likely that L. Halteman, under the terms of its new lease, would absorb what's currently a display area for historic photos of the market.

The Parking Authority has adopted the new regulations for the south side of Arch Street and will put them into effect soon. That means it will be truck-loading only from 5 a.m. to 12 noon weekdays; 30-minute max meters from noon to 8 p.m. weekdays, with a 30-minute limit on weekends, too.

There's a trade magazine for everything: the August issue of Sign Builders Illustrated featured photos and an article on the restored RTM neon sign at 12th & Filbert.

A postcard promotional mailing to go out later this month, targetted to the residents of all the new center city condos, will feature this year's Harvest Festival. It's on the RTM calendar for Saturday, Oct. 13.