I'm off to Maine, so I won't be posting about local stuff for a couple of weeks. (I'll undoubtedly be putting in my two cents on the New England board about what I find in restaurants and markets.)

But before I go, just a quick, exceedingly brief comment:

Wow! Both the RTM and Headhouse were chock-a-block with the full range of gorgeous summer produce this past weekend. All that was missing was blackberries, and since peaches have appeared already, they won't be far behind. The apricots are juicy and luscious, the blueberries spicy, the tomatoes real (including heirlooms), the white corn sweet and corn-y. Doesn't matter whether you to to the RTM, Headhouse or any of the neighborhood farmers' markets, all are offering the best of summer. Indulge! 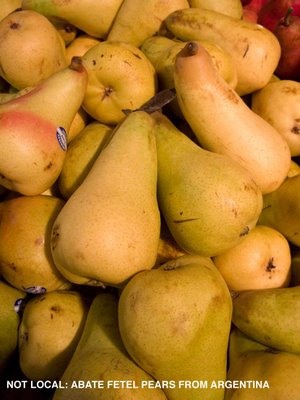 To continue last week's metaphor, the flow of summer fruits and vegetables has become a raging torrent, based on this weekend's visits to the Reading Terminal Market and Headhouse Square.

Beets, one of my favorite roots, are plentiful and colorful. Over at the RTM, Benuel Kauffman's Lancaster County Produce finally has those deep red cylindrically-shaped beauties I so adore.It's one of the sweetest varieties you can find. He was selling then in quart boxes, sans leaves, for $2.50. Chiogga beats could be found at the Fair Food Farmstand. Lots of other beets were available at Headhouse, too. Most colorful were the "rainbow" beets at Northstar, $5 for a quart of the babies and $2.50/pound for larger versions.

I made my second batch of kosher garlic pickles this week, using fairly small kirbies found at Kauffman's, prined at $3.99/pound; O.K. Lee was selling larger but fresh, glistening local kirbies in 1-3/4 pound bags for the bargain price of 99-cents. I couldn't find samples as small at Headhouse, but there were still plenty of nice fresh kirbies, some priced as low as $2/pound (Weaver's Way, which featured slicing cukes at the same price). A variety labeled "Gherkin" could be found at Yoder and at least one other Headhouse vendor, but these aren't the kind of cucumbers you'd find a jar of midget sweet pickles. Instead, these are a very small and spiny variety also known as West Indian or Burr cucumbers. Seedy but great for eating raw, according to one of the vendors.

Local corn and sweet bell peppers are also making their appearance. Prices hover around 60 to 75 cents an ear right now. The green bell peppers at Buzby (Headhouse) were selling for a buck apiece. Eggplants, in all their wonderous variety, are also becoming plentiful. Buzby's big Jersey eggplants were priced at $1.50 each.

The tomatoes aren’t quite where they’ll be in a couple more weeks, but Iovine Brothers Produce (RTM) featured Jersey Ugli’s at $1.45. Kauffman’s red and yellow field tomatoes were fetching $3.99. Over at Headhouse, one vendor was selling heirlooms at about $4.50, iirc.

Blueberries are in abundance right now, as are red and black raspberries. The raspberries were selling from $4.50 for a half pint, blues for $3.50/half-pint, $5.50/pint by the Wenks (Three Springs Fruit Farm) at Headhouse. The fat berries in the pint I brought home were pristine, fresh, sweet and deliriously spicy. Over at the RTM, Fair Food’s blues were going for $2.75/pint, Livengood’s for $3.95, Kauffman’s for $4.95 (or three pints for $12).

Raspberries do tend to be pricey, but they are lovely. Kauffman’s offered reds for $4 a half-pnt, blacks for $3. Fair Food’s purple berries sold for $3.75. Over at Headhouse Wenk's was charging $4.50 for a half-pint of black raspberries. Next week we might see the wineberry variety at Livengood’s, gathered by Sam Consylman. Blackberries should arrive in a couple of weeks, too (they usually appear at the same time as peaches; it’s no accident these two fruits make a great combination).

This week has got to be the peak of the cherry season. Beechwood Orchards (Headhouse) featured two varities of yellowish cherries, Napolean and Emporer Francis. The Napoleans I purchased were even sweeter than the dark sweet cherries; they are more apt to bruise, but don't let that stop you from enjoying these delicious stone fruits. All the sweet varieties at Beechwood were priced at $3.75/pint or $6.50/quart. Over at Wenk's dark cherries were $4/$6.

Sour pie cherries could be found at Livengood's, Kauffman's and Fair Food at the Reading Terminal Market, and Beechwood, Wenk's, and Northstar Orchards at Headhouse. Prices ranged from $4.50/quart at Beechwood and Fair Food to $6.95 at Kauffman’s. Northstar's Morellos were selling at $6.

Another stone fruit now starting to peak is the lovely, spicy apricot. Ben Kauffman had them at the RTM for $3.99/pound, while over at Headhouse they were featured at Wenk's ($4/pint) and Beechwood ($6.50/quart).

Peaches made their first appearance of the season at Headhouse. Noel Margerum selling Jersey whites and yellows at $3.75/quart (4 to 5 peaches). Yellows were $4/quart at Buoni Amici.

Another sure sign of summer, plums, could be found at Northstar (Early Golden and Jewels, $2/pound) and Buoni Amici (sugar plums, $3/pint, $5/quart).

Summer may just be underway, but signs of autumn could also be detected, even if one of them came from the other side of the equator. Locally, an early summer apple, Lodi, could be obtained from Wenk's for $1.49/pound; its highest use would be for sauce.

By no means local, but at Iovine's you could find lovely Abate Fetel pears from Argentina, a large, long-necked variety priced at 99-cents. Black figs from California were selling for $3.99 for a pack of about 10. Mexican red, black and green seedless grapes were being sold in bags for $1.99, each bag containing about 1-3/4 pounds.

On the protein side at the Reading Terminal Market, John Yi didn't have fresh mackerel, but offered salt mackerel at $2.50/pound. I've purchased, cooked and enjoyed pre-packaged filets from Shop Rite in the past; these were dressed (headed, gutted, de-finned) and, like the packaged item, require overnight soaking in several changes of cold water (try running the tap real low) before baking or sauteing. That takes out the salt, but the flesh remains nicely firm. If fresh fish is required, Alaskan sockeye filet was a bargain at $9.99, as was the Spanish mackerel at $1.99 (whole). Softshell crabs were $6 apiece.