A one-pound pack of strawberries for $9.99? Get used to it, at least for the next month or so.

The freeze in Florida and heavy rains in California are taking their toll on off-season winter produce. At Iovine Brothers Produce at the Reading Terminal Market today, the clamshells of Driscoll California strawberries were as expensive as I've ever seen them, $9.99.  In late January and into February, Iovines frequently features strawberries from Plant City, Floriday, at bargain prices, typically $1 or $2 for a one-pound pack. Don't expect to see them anywhere near that price this winter. The Florida freeze hasn't yet impacted citrus prices but Vinnie Iovine expects they'll start heading north over the next week or two. He's even, for all practical purposes, out of leeks! About one-third of Florida's total winter fruit and vegetable production has been lost to the freeze.

The Dutch and other growers will take up some of the slack for some of the items, but they'll be priced to reflect the shortages caused by natural phenomena. Chilean fruit isn't expected to be heavily affected, since most of what they grow isn't duplicated during winter in California and Florida, but even the Chilean grapes have been dear, with better quality bunches selling for upwards of $4.99, though some smaller Chilean seedless grapes could be had for $1.99 today.

Vinnie expects his display bins of specials will be heavy on the root vegetables, rather than fruit, in coming weeks.

Supply, demand and inventory hold their sway over fish prices, too. At John Yi today the mackeral was selling for $1.99, vs. $2.49 yesterday -- they gotta move it before it becomes too old. Meanwhile, Golden priced mackeral today at $2.99. A similar price discrepancy could be found in sardines: $4.99 at John Yi and $1.99 at Golden; there was no discernable difference to my eye in size and quanity between the two fishmongers.

Crowds were thick at the RTM at mid-morning today. Partly that was due to the opening of the home show across the street at the Convention Center,  but also because of a soccer convention that ends today. Yesterday, DiNic's ran out of roast pork by 4:30 p.m., which Joe Nicolosi attributes to the soccer crowd.

It's citrus time at the Reading Terminal Market.

Over at Iovine Brother's Produce Spanish clementines are the star, $4.95 for a five-pound box. The skins aren't quite as zippery as they'll get a little later in the season, but they peel easily enough and have a good sweet-tart taste, as is appropriate for this variety of mandarin orange, which some contend is a lemon-orange cross.

I spied at least three varieties of navel oranges today, one selling for four for a buck, another for three for a buck. Jumanis were two for a dollar. Tangerines, grapefruits and other citrus fruits are also coming into season.

Shad from Southern rivers appeared at John Yi's last week. Today they were selling for $3.99 (buck), $4.99 (roe) and roe sets were commanding $7.99. Local shad don't appear in the Delaware until May.

Based on how good it was a few weeks ago, I bought some haddock fillet at $7.99. I'll pan fry it tonight, perhaps in a panko crust.

Or, at least, price reports from Iovine Brothers at the Reading Terminal Market.

The prices have held relatively steady except for a whopping reduction in the cost of limes. For the past week limes have been selling for a dime apiece. With Hass avocados under a buck (89 cents), it's once more guacamole time. 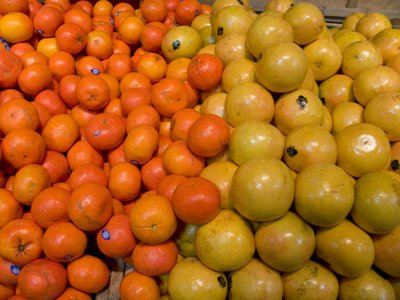 I counted more than a dozen varieties of citrus fruit at Iovine Brothers Produce Saturday morning. Here they are, along with prices:
Among those varieties I've tried in the last couple of weeks, the red navels from Florida were interesting, but I don't think they hold universal appeal. The sweetness and juice levels were well below those of regular navels, and the taste was more akin to grapefruit. I've been unable in web searches to pin down this variety's ancestry, and wonder if it's a cross or derivative of grapefruit. Not a bad orange at all, and a nice change of pace. But not a knock-your-socks-off variety.

If organic and small grower citrus from Florida is one of your requirements, you might consider stopping by the Fair Food Farmstand and paying a premium. Navels and Cara Cara red oranges were selling for $1.50 apiece, Sunburst tangerous 95 cents each. A premier juice variety, Hamlin, priced at 60 cents apiece. Red grapefruit were $2.75. 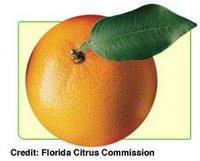