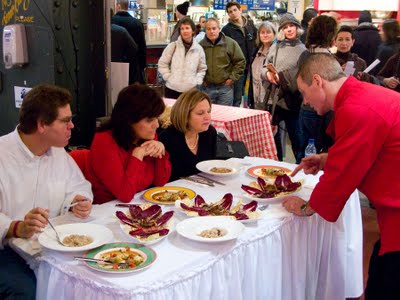 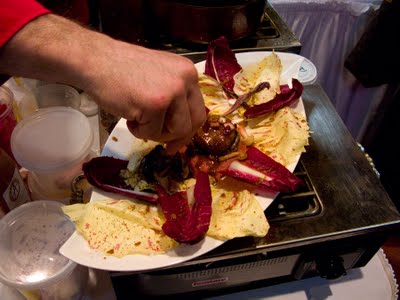 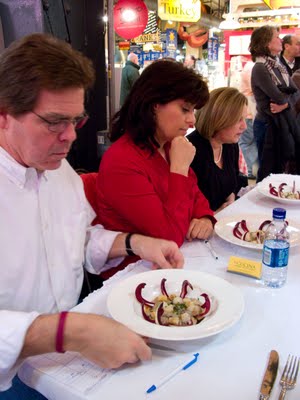 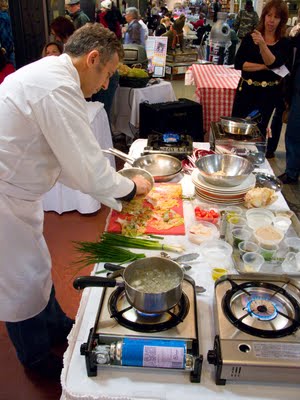 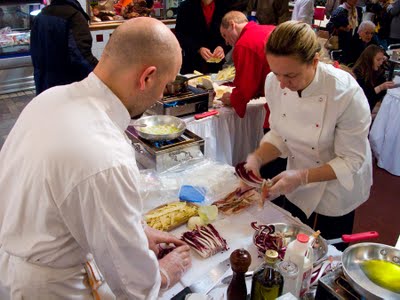 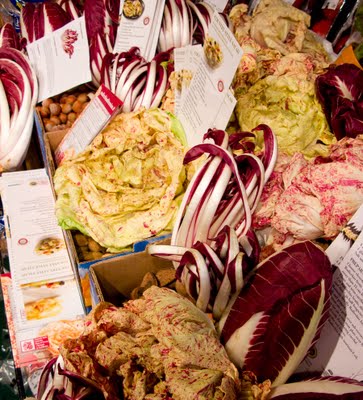 
Today at the RTM

The Radicchio di Treviso at Iovine Brothers Produce at the Reading Terminal Market was priced at $17.99/pound today in cello-trays. Heads of regular radicchio were $5.99/pound.

If you buy those Hass avocadoes from the Dominican Republic for $1 apiece (they still need a day or two to ripen, based on my light squeezes this morning), the limes to accent your guacamole are a little less dear: five for a buck.

Once upon a time you could buy dried Italian porcini mushrooms at Iovine's. All they've had recently are Chilean porcinis, which aren't bad but not as good to my taste. You can find the Italian ones over at the  Spice Terminal; while I don't recall the price, it's considerably north of $30 a pound.

I'm lazy today so I passed up buying ingredients for soup. But it's definitely the right weather for it. I ran into one acquaintence who was planning to make a mushroom soup with maitakes (a.k.a. hen of the woods). For a mushroom barley or cream of mushroom soup, I like the dried porcinis, but also plain old fashioned white button mushrooms. Plain domestic mushrooms tend to be a forgotten food among foodies, but they represent excellent value and depth of flavor, particularly if they're a bit shriveled (but not slimy), which intensifies their flavor.

I complained previously about the high price of grapes. The green seedless ones were even more expensive today: $3.99/pound. Bell peppers are about as expensive as they ever get: even the frying peppers were $1.99/pound today.

The long English cucumbers (nearly seedless) are a good deal at Iovine's, however. Two for a buck. I'm going to make a quick Scandinavian style pickle from one to accompany fried fish for dinner.

As we near the holidays, the variety and price of fish seems to increase, especially those staples enjoyed for Night of the Seven Fishes. I picked up some cod filet from John Yi today at $9.99/pound, which is pretty much the normal price in retail markets. Good-looking whole wild striped bass was available at Yi and Golden Fish for about $6/pound.

What the Reading Terminal fishmongers don't carry is one of my favorite clam varieties: the soft "steamer" clams, which when prepared for frying are often called "Ipswich" clams. You can get them at Wegman's for $5/pound. The RTM fish stalls also don't offer much variety in the way of oysters. Chesapeake, Virginia and, occasionally, Long Island shell oysters are available for about a buck apiece, as are shucked oysters for stewing and frying, but I've yet to see this bivalve from more the northern waters of Maine, New Brunswick and Prince Edward Island.

Joe Nicolosi does more than make great roast pork sandwiches at Tommy DiNic's. He's an accomplished musician. Although his main thing these days is classical piano (he's hard at work on his Chopin), he's going to be playing bass with his old band in a reunion of sorts Wednesday at Johnny Brenda's.

It's always fun to people-watch at the Reading Terminal. Today I squinted rudely to read the badges of one group of visitors attending a convention: the American Anthropology Association. They must have been there to study participants in a cheer-leading competition at the convention center, who were also gawking at the food and sandwich stalls. 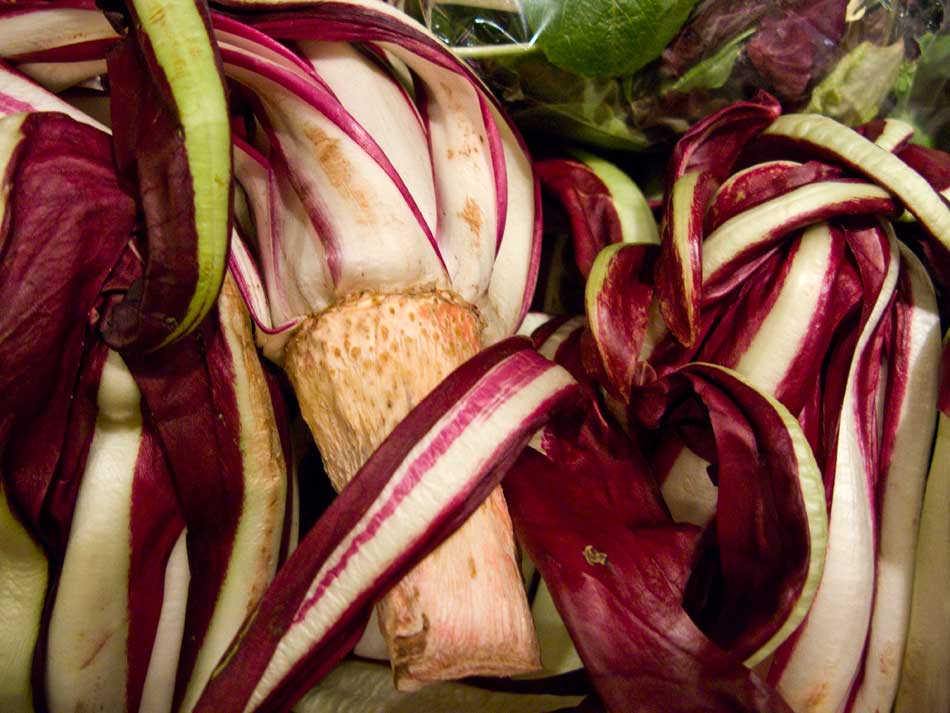 Last February I wrote about Tardivo, a variant of Radicchio di Treviso that I found at Iovine Brother's Produce at $22/pound.

This year the Reading Terminal Market and Iovine's are dedicating an entire festival to Radicchio di Treviso. Or at least 45 minutes worth of festival.

The program, to be held a week from today in Center Court beginning at 11 a.m., will include a brief Iron Chef-like cookoff among local chefs.

Christina Pirello of Christina Cooks (a national PBS show produced by WHYY) will serve as emcee of the event. Among the judges will be Anna Maria Florio, owner and operator of  La Cucina at the Market. Samples of the radicchio will be available at Iovine Brothers Produce.

How to use this bitter veggie, a descendant of chicory?  You could wilt it in sautéed onions and use it in pasta or, without the onions, fold it into a risotto at the end of cooking; blanch it in a water-vinegar mix spiked with bay leaf, salt and peppercorns, then marinate it overnight in olive oil and serve as a salad, garnished with chopped hard boiled egg; prepare a fritto in a thin beer batter; or, do as McDonald's does, and add a few pieces to a mixed salad.