You may have read Friday's Philadelphia Inquirer article about the food shortfall at Philabundance, which serves about 600 regional food banks, soup kitchens, shelters and other relief organizations. In particular, they had a critical need for turkey.

Reading Terminal merchants came to the rescue, donating 25 turkeys. Contributing were all the RTM's butcher shops (Dutch Country Meats, Giunta, Godshall's, Harry Ochs, Martin's, and L. Halteman) as well as Hershel's Deli and The Original Turkey. If you'd like to find out how to donate food, contact Philabundance at 215 339-0900 or surf to www.philabundance.org.

Something I've missed before but won't in the future: anise biscotti at Termini's, $15/pound . . . . Have I not being paying attention or has the price of eggs jumped? Over at Hatville Deli a dozen large whites cost me $2; just a few months ago they were selling for $1.50. Still, that's less than supermarkets are charging . . . . Hershel's Deli plans to bring in Gus's Pickles (and sauerkraut, too) for retail sale . . . . Amy's Place was supposed to have opened at its new location Saturday, but when I left the market at 10 a.m. they were still moving stock over from the old space . . . . The market didn't seem crowded when I was there from 8 to 10 a.m. Saturday, except for Iovine Brothers Produce, which was overflowing half an hour after opening with pre-holiday shoppers . . . . Charles Giunta of Giunta Prime Shop says he can special order goose from Eberly's for your Christmas dinner.

Tom Nicolosi says DiNic's will only offer meatballs on Sunday, so as not to compete with Spataro's across the aisle, which has meatballs on the menu full time, but is closed on Sundays. For today Tom was preapring beef-pork meatballs . . . . The 50-cent apiece Hass avocados at Iovine's last week were awful: they seemed not too far gone when examined in the bins, but once opened at home the same day as purchased they were clearly over-the-hill. No wonder they were priced so cheaply. This week a Hass avocado will cost you $1.99 . . . . Among the items purchased yesterday on my menu last night: Short ribs (English cut) from Harry Ochs, braised in red wine/beef stock with a mirepoix; leeks from Earl Livengood cooked au gratin in a bechamel sauce; fingerling potatoes from Livengood.

The last of the summer wine? Not quite, but Earl Livengood had what has to be the last of the raspberries Saturday. Couldn't bring myself to buy any given the month of the year and the temperatures.

Exceptionally large chestnuts are available at Iovine Brothers in their refrigerated case by the checkout closest to Filbert Street. They are U.S. chestnuts and priced at $5.99 a pound in one-pound clamshells. I've been roasting them for more than a week and they are very good, rot-free with a high yield. Better than what I bought earlier from Earl Livengood.

Mackeral are back, $2.49 at John Yi's. In a few weeks we should start seeing a wider variety of fish for the holiday season.

Before the end of the week, Amy's Place will move to its new location (the former Foster's, opposite Fair Food Farmstand and Pennsylvania General Store) offeriing an expanded stock of practical kitchen hard goods to go along with decorative items.

To fill temporarily the space Amy is vacating the market has attracted seven vendors to a "Christmas Market" similar to the temporary gift stalls that sprout up this time of year in Mittel Europa. To accomodate all seven the market will also place them in the adjacent space occupied by Le Bus before it moved.

Behind the new Amy's is the market's demonstration kitchen, which should see increased activity beginning in the new year. In addition to Temple classes, instructor Ann Florio will begin a full schedule of classes under the name La Cucina. Florio is a proponent of "learn Italian while you cook".

The market was scheduled to start a recycling program this week, with receptacles for customers to recycle paper, aluminum cans, and plastic.

An accident on the Schuylkill Expressway has put a major dent in the availability of high-quality pork in Philadelphia.

About two weeks ago Country Time Farm's owners Paul and Ember Crivellaro were injured when their truck was rammed from behind by a tractor-trailer on the expressway. Both were hospitalized overnight in ICU, but the injuries turned out to be less severe than initially feared. For that, we are all grateful.

The pork they were bringing to town wound up cushioning the blow and may have helped save them from more serious injury or death. But the pork was lost. And there's no word on how soon the Crivellaros will be able to produce, butcher and distribute more product.

In the meantime, stocks are low. At the Fair Food Farmstand at the RTM Saturday only a handful of packages of boneless cutlets and one pack of chops were available.

The Crivellaros also supply a number of restaurants with their pork.

In my Philadelphia neighborhood, London Grill in Fairmount has "Meatball Mondays".

Tommy DiNicolosi is experimenting with meatballs at his Reading Terminal Market landmark. I caught Tommy Saturday shaping a beef-pork-veal mix. Before leaving the market about an hour later, I tasted one. It was quite nice, and the sauce was even better. Tom said he used skin from a fresh ham to help flavor the tomato-based sauce.

Tommy insists he's just "playing" with meatballs and hasn't added them to the regular menu. But you can expect to see them on Sundays. Last week he tried a beef-lamb meatball which he said turned out well (just a little bit of lamb; mostly beef). If you want to try them, get there early: for this past Sunday Tommy only prepared 10 pounds of meat.

Mary and Stuart Salen, who operate four-year-old farm Olde Earth Farm in Berks County, have been selling at the Headhouse Square market all season long. In addition to various greens they sell meat products raised on their farm, including Tamworth pigs, Suffolk lamb and Scottish Highland beef. I've tried the bacon (available in both nitrite and nitrite-free versions) and it is excellent. Tonight I'll be grilling their ham steak (nitrite-free). They are considering expanding their Philadelphia presence to the Reading Terminal Market next season. In the meantime, they'll be at Headhouse on Sundays through the end of its season. Most of Olde Earth Farm's vegetable production goes to its 100-member CSA, so not much gets sold at the stand. Mary makes up for that with homemade baked goods and jams.

Also considering adding the RTM to their venues is Hendricks Farms and Dairy.

The Headhouse market will be open the Wednesday before Thanksgiving, closed the Sunday after Thanksgiving but then open every Sunday through Dec. 23 before shutting down until next spring, probably reopening in May.

Much of what I have to report today can be said in pictures. So here goes: 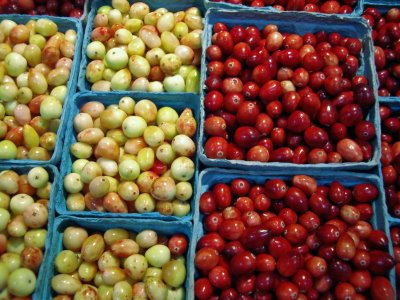 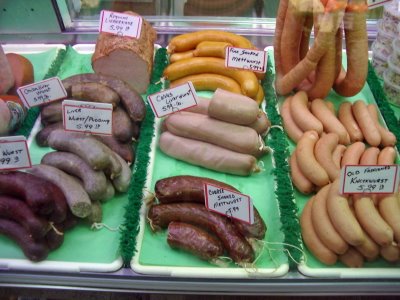 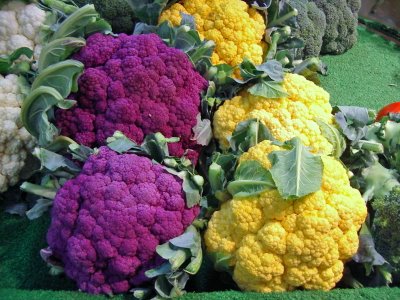 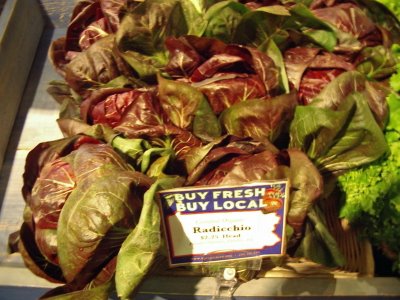 Harry Ochs had some exceedingly good looking lean beef in his display case today, simply marked for either cubing or grinding, priced at, iirc, $4.49 (or was it $4.99?) a pound. Nick said it was shin with the bone removed. I picked up a pound and a half, single grind, and made it into a beef base for a cottage pie I'll finish making tomorrow. The braised ground meat (with onions, beef bouillion, thyme, worcestershire sauce, Kitchen Bouquet for color) was nicely beefy with a tender yet toothsome texture, probably because shin has some decent colagen content. I think this meat would be all wrong for hamburger (much too lean), but great for chili and other ground beef dishes that should simmer on a low flame for a while. The ultra lean meat ultra caused me to add a little extra oil to the pan while browning. Although it was more expensive per pound that the ground sirloin, it was nearly as economical because the sirloin is somewhere around 17-20 percent fat; if the shin was 5 percent fat I'd be surprised. The only other time I've used shin was to cook it whole Chinese style (that, too, was delicious).

With a new hire, DiNic's is expanding its hours. They'll start slowly beginning tomorrow, Nov. 4, with Sunday hours. Eventually the goal is to extend weekday hours until the market's 6 p.m. closing.

Don't be surprised if one or two of the vendors from Headhouse Square set up shop at the RTM in the future, either during the winter and/or other days of the week when Headhouse isn't operating. Hendricks Farm and Old Earth Farm are prime candidates, according to market GM Paul Steinke.

Steinke also said he has vendors lined up for the "Christmas Market" which will occupy the space being vacated by Amy's Kitchen in their move to the old Foster's store. If he gets additional interest, he'll expand the seasonal vendors to the old Le Bus space.

Emily Teel of the Fair Food Farmstand is pushing the persimmons. They're grown by the same South Philly amateur orchardist who supplied the stand with figs about a month or so ago. Also at the farmstand, white cranberries. They are not a different variety, just an immature berry and, because of that, tarter, so add extra sugar. The white cranberries were selling for $6 a pint vs. $4.50 for the red.

Earl Livengood had fantastic red beets last week. They appear to be a similar variety to the cylindrical beets Benuel Kauffman sometimes features. I roasted Earl's in the oven (400F for about 50 minutes) and they are as sweet as any beet I've ever had.

Now's the season for pumpkin ravioli. Pasta By George has a nice pumpkin-riccotta version, though they aren't cheap: $10.99 for 12 raviolis (yielding two portions for an entree, four for appetizer course). I made a simple sage brown butter sauce for them.

Jeffrey Roberts, author of the Atlas of American Artisinal Cheese (Chelsea Green, White River Junction, Vermont, 464 pp, $35), was selling and signing copies of his book last Saturday in the same table spot formerly occupied by Green Valley Dairy, next to the Fair Food Farmstand. Roberts, a former Philadelphian who's been in Vermont doing his cheese thing, was fascinating to talk with. If anyone is interested in finding great American cheeses, or just has a hankering to learn more, buy this book. In it he profiles more than 350 American cheesemakers and includes info on how to order, whether on line, by phone or at the farmstand. He tells of one cheesemaker who sells her entire output only once a year at a Maryland sheep and wool gathering. Although it's designed as a reference book, it was pure pleasure to go through entire sections of the book, which is arranged geographically by region, and then by state. It opened me up to lots of new cheesemakers, and told me things I didn't know about some of my favorites. On my next trip to Wisconsin to visit the in-laws, I'm going to plan our excursions around this book!

Green Valley is among the cheesemakers profiled in the book, but they no longer sell direct to the customer at the market. However, you can purchase their cheese at the Fair Food Farmstand. The Amish producer is concentrating on restaurants and the wholesale business. If you haven't tried it, their Pennsylvania Noble is a wonderful cheddar.

Over at the former Foster's space, shelving and display units have been delivered for Amy's Kitchen, which hopes to open in its new space a week before Thanksgiving.