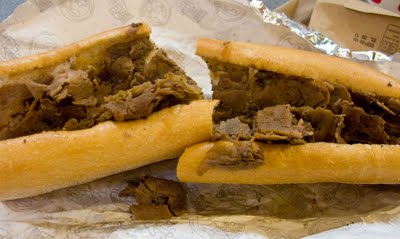 When I first started visiting the Reading Terminal Market more than a quarter century ago, Spataro's was known as the place where you could stop for lunch and pay about as little for a sandwich as humanly possible. Inflation and menu upgrades have changed that, though Spataro's (which has since moved from one part of Center Court to another) still represents good value.

The addition of cheese steaks to Spataro's bill of fare earlier this year is partly responsible for the hike in average menu cost ($7 for a plain steak, iirc). Their version of the cheese steak represents the third and final entry in my RTM survey of this Philadelphia classic.

The best thing about Spataro's is the meat. Although it would take side-by-side comparisons to confirm this (I've spaced my tastings over the past five or six weeks), I thought their meat was the beefiest I've tried so far, when compared to By George and Carmen's. There was also a satisfactory taste of onions in my sandwich though I could have used a bit more. The bread was okay, the typical soft steak roll -- I'd like just a hint of crunch to the crust.

The main failing was the cheese: I couldn't taste it, let alone detect the cheesy, gooey mouth feel I want my cheese steak to convey. As best as I could determine, they used two thin slices of American, though provolone is also offered. Another failing is the unavailability of hot sauce.

Still, it's a fine representation of a cheese steak and you won't be disappointed when you crave this icon of our fair city's culinary heritage.

This morning Joe Nicolosi offered me a taste of some of his pulled pork fresh out of the oven. Gotta say, while this sandwich is excellent eating any time of the day, it's better if you can get it fresh before the fat has a chance to re-congeal. It absolutely melted in the mouth, with textural contrast offered by the crunchy bits. As previously noted, don't confuse this version with what you're likely to find in North Carolina: the seasonings are Italian (with tons of garlic), not barbecue.