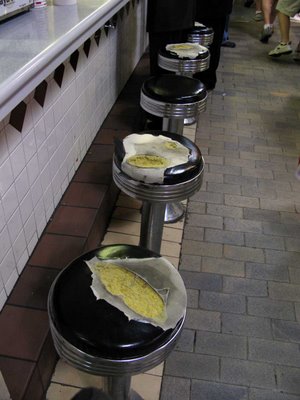 Walking around the Reading Terminal Market this morning I noticed the stools at Fisher's, the Pennsylvania Dutch section merchant who sells fresh pretzels, ice cream and candies. Seems like a little minor investment is in order. Certainly doesn't reflect well on the merchant or the entire Amish section. Proprietor Paul Fisher should either recover the stools, replace them or remove them.

Keeping up appearances by individual merchants is in tune with some minor sprucing up market management is undertaking: a repainting of the seating areas, additional bins for recyclables, and the ordering of a new striped awnings to adorn the Arch and 12th street sides.

Another merchant volunteered to me with no prompting that he thought it weird that the row between aisles 8 and 10 is where most of the market's vacancies occur. The market would still like to locate a produce vendor when Rick Olivieri vacates his space Oct. 31. GM Paul Steinke would love to see the Fair Food Farmstand move there, but placing produce where they get afternoon sunlight makes it a less than idea location for that use without significant engineering and electricity consumption.

Fair Food will be spending more on electricity soon, even if they stay in place. Co-manager Sarah Cain said a grant from the U.S. Department of Agriculture will pay for refrigerated vegetable gondolas, which should improve the shelf-life and quality of produce that needs cooler temperatures. That means some significant rearranging of the stand's layout is in the offing, including a possible expansion into a small part of the adjacent seating area. Another grant has been awarded for improved signage, which will be designed once the details on the new refrigeration equipment and stall design is locked up.

The Fair Food Farmstand also began accepting USDA food stamp electronic cards this week. It's something many of The Food Trust's farmers markets have been doing for a while.

The fall cabbage crop has started to show up at produce vendors. Earl Livengood had small heads of red and green cabbage. Benuel Kauffman's Lancaster County Produce had half heads of large green cabbages for $2. Ben also has the cauliflower I mentioned in a previous post (photo below). 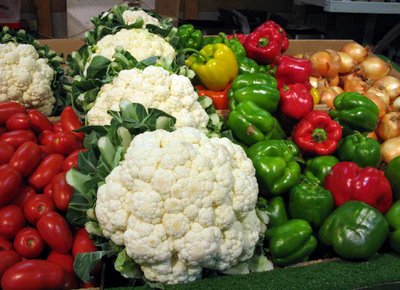 Another sign of fall could be found at Iovine Brothers Produce: pumpkins. They featured a bin of small "spooky" pumpkins selling for $1.99 apiece. Welch's, mostly known for their grape juice and jellies, is extending the brand by licensing their name to a distributor of table grapes; Iovine's had three-pound clam shells of green seedless grapes selling for $1.99 today. (Welch's is dear to my heart: I went to college at a historically Methodist liberal arts college with affiliated seminary where one of the women's dorms was named after the Welch family, which started their business in 1869 in Vineland to provide grape juice for communion for the alcohol-free congregations.)

Yet another sign of autumn: chestnuts at Livengood's, right next to the paw paws.

I've written before of the Joe Jurgielewicz & Son ducks available at Giunta's Prime Shop. In addition to whole ducks at $3.95/pound, Giunta's recently added packs of legs ($6.49) along with their boneless breasts ($12.95). Just in time for confit-making season.

Another correction: I misspelled the name of the cooking school at the market in a recent post. It's "La Cucina", without an "h".