Fowl For Your Feast

A beautiful, mahogany colored roasted bird makes a wonderful edible centerpiece for a holiday table. And no bird is more Christmas-y than a roast goose.

At the Reading Terminal Market L. Halteman Family has locally raised geese in stock. The birds, roughly 10 pounds, sell for $5.79/pound. The Fair Food Farmstand is selling geese from Griggstown (NJ) Quail Farm for $10/pound. Geese and lots of other birds can be obtained from Godshall's Poultry. In all cases it's wise to call ahead and order. It's almost too late to order from Fair Food; orders for the Griggstown geese, as well as pheasants, must be placed with Fair Food by 9 a.m. this Monday.

All the other butchers at the market (Martin's Quality Meats & Sausage, Giunta's Prime Shop, Harry Ochs & Sons, and S&B Meats) also can accommodate special orders for the holidays. Among other items, Giunta's is selling turduckens for $39.95 apiece.

A month or so ago, Chilean avocados appeared at Iovine Brothers Produce at the Reading Terminal Market. Today the $1 apiece fruits hailed from the Dominican Republican, which I had not seen before.

We seem to be in an interregnum as far as table grapes are concerned. All the varieties I looked at recently have been priced at $2.99/pound. We may not see significantly cheaper grapes until the Chilean harvest starts in late winter.

I picked up some nice, heavy-for-their-size navel oranges today, three for a buck. Not a bad price, but they should come down a bit as we get into winter.

I started to use the smoked haddock I picked up a few weeks ago at Wegman's in Cherry Hill. I took about five or six ounces out of the one-pound filet and mashed them up with an equal amount of cream cheese (softened with about a tablespoon of sour cream), ground in some black pepper, and finished with a couple tablespoons of both onion and parsley. Very yummy on good rye bread.

Speaking of sour cream, I bought some at Fair Food. Although "all natural" it was full of vegetable gums, for no apparent reason. The Dairylead brand, available at some supermarkets, is made from nothing but cream. It may not be organic, but it's good.

One of my readers reports that he tried to find the smoked haddock, a.k.a. finnan haddie, at Wegman's, but they were all out. If you find it, don't pass it by.

When winter arrives, I'm a big fan of frozen fruit, particularly berries. Nothing like some tasty, sweet and tart blackberries to mash up with a full-fat yogurt for breakfast.

With its recent expansion the Fair Food Farmstand at the Reading Terminal Market has more room in its freezers, so it's added another fruit to its small frozen selection: strawberry puree. The one-pound packs from Green Meadow Farm, a delicious looking red, are priced at $5. I haven't tried them yet, but I can't imagine theyd be anything but excellent.

Another summer fruit you can enjoy in winter are peaches. Canned peaches from Three Springs Fruit Farm (one of the vendors at Headhouse) can also be found at Fair Food; I went through a few cans last winter and thoroughly enjoyed them.


No Vacancies at the Market

If you want to start up a stall at the Reading Terminal Market, you'll have to wait for an existing vendor to fail.

With the recent move of the Fair Food Farmstand to the 12th Street side of the market, the opening of S&B Meats and Barb & Suzy's Kitchen, and next week's opening of Beck's Cajun Café all available space has been leased for the first time in a couple of years.

The move of Fair Food expands the available seating in the court closest to Arch Street, and it will remain that way, according to Paul Steinke, the market's general manager. 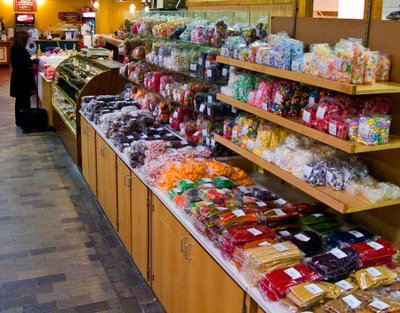 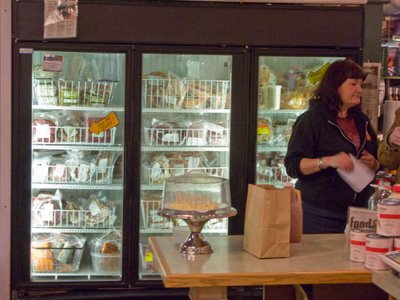 When the Fair Food Farmstand moves to its new location within the Reading Terminal Market sometime this spring, this old, recalcitrant freezer case will be replaced. A week ago Friday is went kaput, forcing FFF to sell it's contents (mostly meat) at half-price, much to the delight of shoppers. The few items that remained were donated to a local food bank. That's FFF co-manager Sarah Cain lamenting her cool problems.

I'm a sauerkraut fan, so I picked up a jar of Wills Valley Farm's fermented red cabbage at the Reading Terminal Market's Fair Food Farmstand a couple of weeks ago.

I came to this conclusion after gently braising some German-style hot dogs in the red cabbage kraut. First I gently sautéed a medium onion in canola oil (butter would work, too) until just barely starting to turn golden, then I added the red cabbage, allowing it to cook covered for about 10-15 minutes. I had an old Asian pear, slightly shriveled, sitting in the crisper, so I peeled it and grated the pulp into the cabbage. (An apple is the usual addition, but none were in the larder.) Then I added maybe a quarter cup of water (if I had an open bottle of white wine, I would have used that), a couple of the foot-long franks, covered again and simmered low for another 10-15 minutes. Delicious, especially when served with a German-style mustard.


Pre-Thanksgiving Rush at the RTM

Over at the Reading Terminal Market, extra checkouts have been added at Iovine Brothers Produce for the holiday rush in an effort to keep those long lines moving.

Many of the Pennsylvania Dutch merchants, who are usually closed on Mondays and Tuesday, will be open on those days (as well as Wednesday) before Thanksgiving. Those planning to be open both Monday and Tuesday are AJ Pickle Patch, Beiler's Bakery, Hatville Deli, L. Halteman Country F0ods, and Lancaster County Dairy. In addition, the Dutch Eating Place, Dienner's BBQ Chicken, and the Rib Stand will be open Tuesday.

On the day before Thanksgiving, shoppers lined up waiting for the doors to open at 8 a.m. will be treated to free sample cups of coffee, courtesy of Old City Coffee. But it won't be at all the doors: just the 12th & Filbert entrance.

This morning 12 servers were working at Godshalls to push out those Thanksgiving birds, with a lineup of customers as soon as the market opened at 8 a.m. Expected even longer lines Wednesday.

Temporarily, at least, the Fair Food Farmstand has some extra display space, though no sales space. It's in the vacant stall formerly occupied by Everyday Gourmet and, before that, Andros. Squashes and other colorful items point the way to the the farmstand.

Speaking of Andros, he's the only retailer in town (2056 Pine) where you can acquire Leonidas chocolates, a high volume but nonetheless delicious Belgian praline manufacturer. As was once snootily explained to me by the proprietress of the old Belgian Chocolate House on S. 17th, "That's what you buy your domestic for Christmas." I'd do windows for that stuff!

The paperwork is moving along for a new pork purveyor who will move into the space formerly occupied by Dutch Country Meats. The stall has a long history of pork vendors dating back to Moyers and Charles Giunta (who now operates Giunta's Prime Shop). The butcher will sell the Stoltzfus Meats' product line, including scrapple and sausages as well as fresh pork. Not determined whether he'd handle deli products. In addition to its store in Intercourse, Stoltzfus sells at the Ardmore Farmers' Market, the New Castle Farmers' Market, and Beechwood Deli at the Fairgrounds Farmers' market, Allentown.

The Philadelphia Daily News' has selected the Reading Terminal Market as recipient of two of its People's Choice Awards: Best Farmers Market and Best Produce.

Those same Griggstown Quail Farms Red Bourbon turkeys I mentioned in the previous post are also availalble through the Fair Food Farmstand at the Reading Terminal Market. And they are even less expensive! The Farmstand is charging $6.50/pound for the heritage birds. In addition, you can reserve a traditional turkey for $2.99 (naturally raised) or $$4.50 (certified organic).

For the rest of your Thanksgiving table, you can take advantage of Fair Food Farmstand's other offerings, including both common and unusual squashes and white and red cranberries.

Aaack! The Farmstand is still using the term "wildcrafted". Last spring it was used to describe fiddlehead ferns. In the FFF's most recent weekly newsletter they are promoting Hen of the Woods mushrooms "wildcrafted by Patrick Murphy". Wildcrafted is taken to mean the gathering of wild plants in a manner which causes no permanent harm to the environment or the species. The goal is laudable, the nomenclature deplorable, a grave abuse of the English language worthy only of the most depraved advertising copywriter. How about "sustainably-gathered" instead? Wild-crafted erroneously suggests Patrick created/raised/nurtured the mushrooms.

Oh, well. At least the newsletter no longer considers the Jonamac a heritage apple!